Full Name
Stephen Jackson MS, LPC
Job Title
Founder
Company
Global CommUnity Associates
Speaker Bio
Stephen Jackson is a motivational speaker, licensed professional counselor, director of equity and antiracism at the Oak Park (IL) Public Library, and founder of Global CommUnity Associates, a restorative practices consulting firm.
The son of a pastor, Mr. Jackson became involved in gangs as a teenager and served 12 years in prison in Illinois. While incarcerated, he used his time constructively, pursuing all the academic options available to him and completing two associate degrees and four certifications. Upon release, he dedicated himself to improving his community.
A self-described “perpetual learner,” he is a trained restorative practitioner and holds a master’s in clinical mental health counseling and a bachelor’s in behavioral sciences from National Louis University.
As director of equity and antiracism at the Oak Park Public Library outside of Chicago, he has developed frameworks to successfully engage with some of the libraries' most vulnerable and marginalized populations, including individuals experiencing homelessness, mental health crises, income insecurity, and incarceration. His work has been referenced, adapted, and modeled in numerous institutions across the nation wanting to dismantle systemic racism and oppressive systems.
Twitter Handle
@GblCommUnity
Speaking At
Opening Session, Keynote, and Awards Ceremony 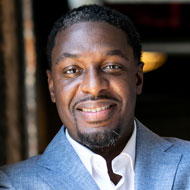